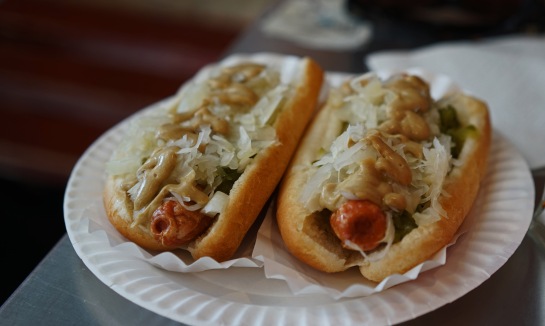 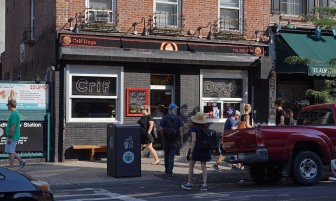 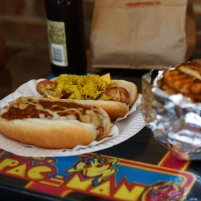 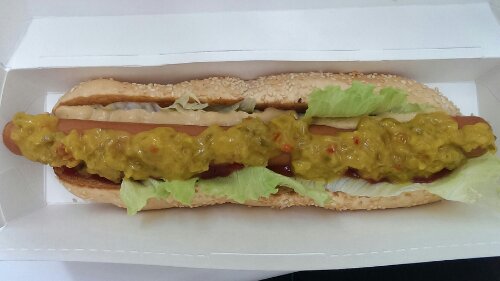 During our last visits funnily having weird random food at ‘Tsui Wah Eatery’ has become part of the normal schedule. This time we didn’t really get around to it during our stay but were given a last chance at their airport branch which I had never recognized before.

I ordered their ‘Jumbo Frankfurter Hot Dog‘ which I remembered being not too bad. Actually it was better than my memory suggested, humongous indeed with its’ 11 inches and with great flavors. The sesame bun was nicely toasted and held up it’s part of the deal pretty well. The frank bedded in crunchy lettuce actually was great too, it was pretty well seasoned and the casing snapped perfectly. So far this was a good yet still ordinary dog but what made it truly delicious was the mix of condiments they used, sweet tomato sauce – or “ketchup” as I would call it – a sweet and sour mustard pickle relish and a brilliant nose -hair-curling horseradish cream. Totally satisfied. 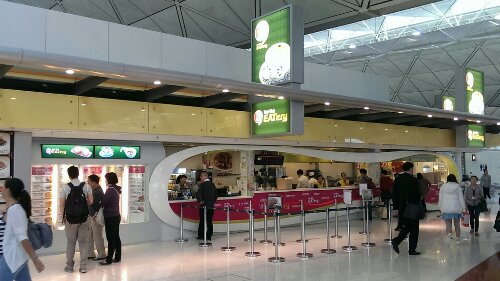 The Roo Burgers are in Town 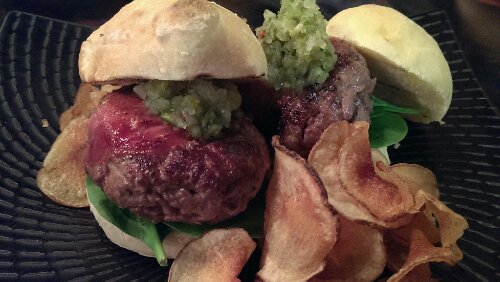 I had read about ‘Intrepid’ on other blogs and friend’s facebook posts and since then couldn’t get those ‘Kangaroo Sliders‘ out of my head. So when my friend asked me what my plans for dinner were I made this a suggestion and so we went. We had a bit of a hard time finding the place as it didn’t have a big sign yet but when you find the Water Gate of Far East Square and look very closely it’s exactly next to it.

Naturally we started with the famous ‘Kangaroo Sliders‘ and they looked pretty darn good coming out of the kitchen. As kangaroo meat gets tough and dry very fast they broiled it to a medium rare. I usually prefer my burgers medium to medium well but the meat was of such good quality that medium rare was perfect and kept the patty moist and juicy. It was lean and had this distinct venison like flavor lifted up a level by the saltiness of the prosciutto that was “melted” on top. The bun was lovely fluffy and the host told us that they are making them from scratch freshly every day just for this dish as well as the crispy chips which maybe could have used a pinch more salt. 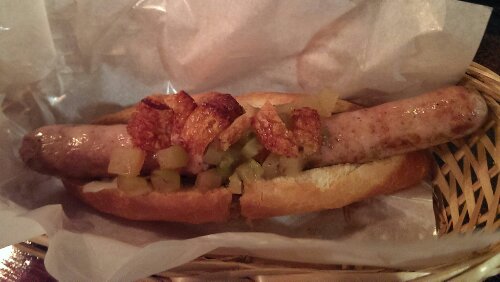 As seconds I ordered the ‘Pork Sausage‘ which seemed to be some sort of special as it was off the usual menu. The “dog” came in a proper baguette bun, not that usual soft mushy stuff and the sausage had a great snappy casing, the meat was firm, well seasoned and tasted nice and porky. I found the sprinkled crackling on top was a great idea but maybe would have been even better if it was roasted instead of fried. The most delicate and special bits here though were the thinly sliced fennel slices that unfortunately were a bit overpowered by the sausage and the cubes of baked apple that had a fantastic sweet cinnamon flavor. 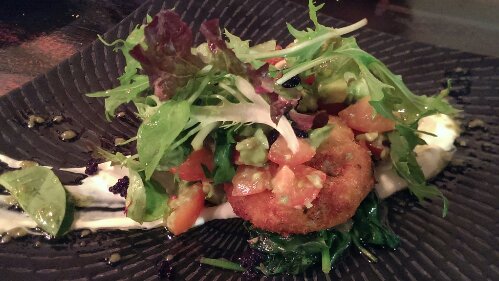 Recently we always seem to order beyond that hunger feeling and this time it was the ‘Crab Cakes‘. They were fully packed of sweet crab meat with a super crispy crust in which was a tad too much frying oil left. The cakes were accompanied by a salad of mixed leaves, tomato, creamy avocado as well as black and salty caviar that popped nicely in my mouth and tasted like little drops of sea.

I quite liked it here with the Aussi twist they took on the dishes and the very friendly and kind staff so I might be coming back to try their ‘Kangaroo Loin‘ and the brunch items. Thanks guys!

Slight deviation from our quiche house recipe using less cream and more nuts and playing around with the rest of the ingredients, adding leek and some leftover frozen pork belly back from when I tried to recreate the @momolongplay pork buns. Crumbly but so tastiful. . . . . #quiche #frenchfood #homemade #homecooking #fromscratch #baked #getmygrubon
Quick impro prawn curry with a blasphemic combination of Madras curry paste and coconut milk. 😳🤫🤯😶 Even though this has nothing to do with authenticity at all, it was freaking delicious. Ps: I don't (yet) do food shoots with props but that fluffy chair just stood there way too conveniently. 📸 . . . . #prawncurry #madrascurry #indianfood #thaifood #fusionfood #homecooking #homemade #fromscratch #getmygrubon
Saw those last two fresh quails at the Freiburger Münster market and since I've never made any of these they shorthandidly wandered into my basket and later - simply dressed - into my oven. Quite pleased with my first attempt. . . . . #quail #rostedquail #poultry #gamebirds #homecooking #homemade #fromscratch #newfrontiers #hobbychef #getmygrubon