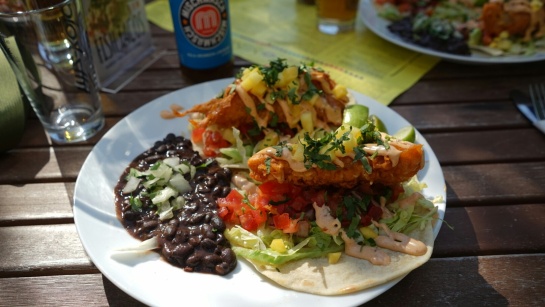 I hadn’t been to the shack for a while but the sun was out, I had Mexican-Food-Loving-Friends in town and these guys just had announced the return of the baja fish tacos to their menu. So when we arrived back in Freiburg after a day of exploring the black forest and beyond we headed straight for Stühlinger and one of their outside tables ordering a set of fish tacos each.

I’m not sure if my picture does it actual justice but these babies were intimidatingly ginormous. M. and our friend C. intuitively reached for fork and knife but I was willing to get my hands dirty. After all, these were tacos, right? Flipping up the sides of the appropriately large flour tortillas I wasn’t even able to close them properly above the crisp battered perch but I was ready for my first bite and didn’t plan on letting go of it. This was amazing. I still remembered them vaguely from the BZ food truck festival last year but it was like a brand new experience altogether. The batter cracked under my teeth making way for the wonderfully flaky fish meat that was breezy fresh and cooked ’til perfectly glassy. Just moments after the fish literally melted, and the juices had drenched my hands in tasty goodmess, all the other flavours started kicking in; the creamy chipotle mayonnaise, the crunchy greens and veggies, some sourness coming from that tropical salsa and especially awesome vibes blazing from the fresh Mexican herbs. It was like being teleported to a Californian beach (without ever being to one) for a couple of minutes, sipping on a cocktail enjoying the sun. Oh yes, I am glad these fish are back in town.

On top of an excellent meal the service today was super refreshing, attentive and friendly and on my way out I also finally got to say hi to some of the great people, who are responsible for all this. Thanks so much guys and see you soon.

I collected a huge repertoire of food memories and pictures since I have been back to Europe, mainly because I have been traveling a fair bit to the Netherlands/Holland, Switzerland, France, Spain and Italy, which of the two latter were very focused on the local food experience. That aside I think it’s only appropriate to choose a place in Germany for my first review since almost a year, not German cuisine however representative for what’s going on here at the moment. The Holy Taco Shack is part of the reinvention of the culinary scene in Germany right now. Many people put a totally different value on the food they sell and eat today with a lot of love for detail and appreciation for culinary skill. Some results out of this are the growing numbers of food trucks as well as street food festivals and markets that seem to have started in Berlin but already have spread into all corners of Germany. This particular truck, or actually more a food trailer, is run by a German-American couple that left their former jobs behind and started their own business filling the big gap of proper Mexican food in Germany and thankfully decided to do so in beautiful Freiburg. 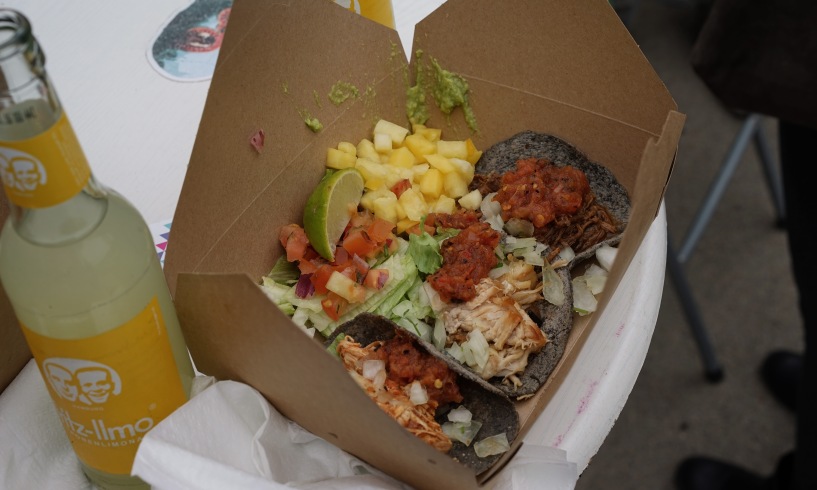 After many missed opportunities to try their food before, I finally managed to be in Freiburg at the right time for their weekly appearance at the Rieselfeld Market on Saturday. We went fairly early, as apparently their food sometimes sells out rather quickly and I wanted to have free choice. So here I was, ordering my first round of Classic Tacos – a set of three – with all the meats from the menu, chicken chipotle, beef brisket and my secret passion, the carnitas, medium spicy with some extra mango salsa on the side. They use their homemade corn tortillas, made from maíz azul (a black purple-ish type of corn) that have a bit more to them than the regular corn tortillas. It might be just the colour but I thought they were pretty great. Now on to the inner values and I must say that all of the meats were exceptionally delicious. The beef was super nice and tender like it was slow cooked for ages (which it probably was) and the chicken, which I expected to be either a bit on the dry side or drowning in sauce, I liked even more, just so juicy and fantastic. My other expectation though proved to be right; the carnitas are still my absolute favourite. They were wonderful moist with a good char on the edges that had touched the hot plate, an insanely good combination of meat and fats. The homemade medium salsa was just right, not too spicy but still gave me a kick on my tongue and the mango version for an extra €1 was the perfect companion and totally worth it. Fruity, slightly sour and refreshing in between the flavour party going on around here.

Since I wasn’t sure when I’d be having another chance to eat here again I went for a second round of the same, just this time with the spicy salsa and the extra jalapeños. This salsa is fun and squeezed cold sweat right out of my head so that I wished I would have ordered this mango pineapple salsa again to cool things down a little bit. All in all amazing food.

It was busy that day, the queue got longer and they still stayed cool and friendly even that many people were asking a lot of questions about the food and the TV show they have just been part of. I hope I’ll be able to come here many more times, it’s good to have you guys around, keep it up and all the best.