On our way back from KaDeWe to the train station, we made one last stop at Bikini Berlin to check out a Japanese tea shop, that had a green tea road show going on.

Rolling in, we first made a quick pit stop at the Funk You stall right across the big monkey window, where the young crowd spent their afternoon and a single elderly man meditated in between all the buzz like it was the most normal place.

I had an iced black moon cold brew coffee and M. got herself a huge chai milk tea. I can’t speak for the tea but I loved the cold brew with its chocolaty notes and a sucker punch of caffeine. Even though the coffee is Berlin branded I would have assumed that a place like this would make their own coffee specialties, including cold brew and such but who am I to judge their make or buy decisions.

It’s a nice place, nothing too exciting or unique, but nice and cosy within all this hustle and bustle. One last mentionable thing was the super friendly staff, truly enjoyable service.

Food heaven on the upper floor.

After that currywurst kick-off at Bahnhof Zoo we ventured further for some window shopping, following the crowded streets all the way down to KaDeWe, which stands short for ‘Kauhaus des Westens’ (Department Store of the West). It’s quite a big store indeed with enough goods for a daylong shopping spree. We didn’t know yet what we were looking for here but it was neither perfumes nor fashion.

We took the escalators all the way up to the top with the intention of working our way through every section back down to street level. Once we arrived on the upper floor though we found an endless ‘food court’ (the fancy way) and a deli section, which should grasp our entire attention for the next two hours or so. 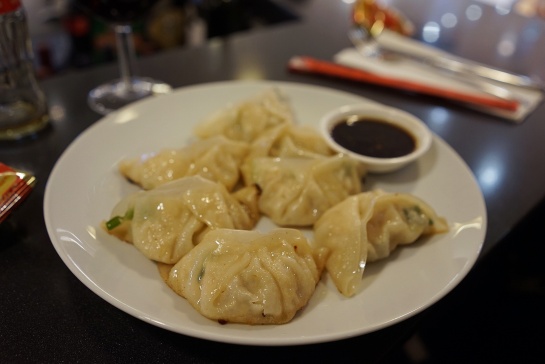 Being overwhelmed at first – I mean there was a whole section jam packed just with those awesome colorful fleur-du-sel-eggs – we spotted a Chinese food bar kind of place (‘Silverpagoda’) and deemed it an appropriate place to reset our intentions and just continue with our foodie adventure weekend right here, right now.

We had a serving of the xiao long bao and the guo tie, accompanied by a refreshingly chilled beer. The xiao long bao weren’t as crafty, thinly skinned and pretty but from a taste perspective, I was very happy with them, juicy and yum. The same goes for the thinner skinned guo tie that had a lovely crust at their bottom side. I have been away from Asia quite a while now so those, while not being perfect by any means, instantly hit my sweet spot (yes, that’s my tummy) and if they have had some julienne ginger soaking in their Chinese vinegar, this would’ve been even multiplied. Funny how the small things still matter.

We spend the following hour taking just one single round on this level full of goodness almost buying everything, ending up buying nothing, but one of the best window shopping sessions I have ever had nevertheless.

Eventually passing through a section of seafood restaurants in the higher price ranges made a craving for crustaceans crawl up on me and thankfully in the next section, just outside, were a couple of fish butcher type food stalls selling similar fair at slightly lower prices. I grabbed me a straight langoustine tail, with cocktail sauce and bubbles to close this fine experience. It was good and I felt classy.

I wouldn’t say that this was the best food I’ve ever had or that you’ve got to go out of your way to see this but if I’m in the area again in the future and feel a light hunger for nothing in particular, I might just come back all the way up here to get inspired and fed. 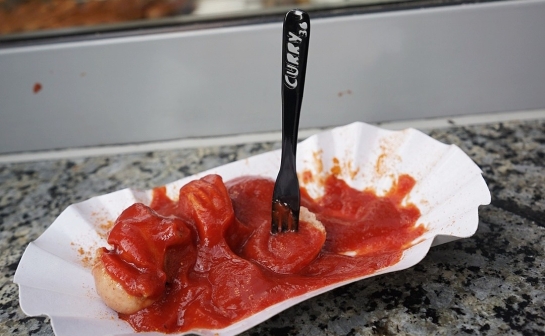 So this was our first day in Berlin and I was overly excited about the days to come, the friends to meet, the things to see, foods to eat and drinks to drink. In this spirit, we ventured out from our base in Mitte to the surrounding area of Bahnhof Zoo and Kudamm (Kurfürstendamm). Not entirely hungry yet but feeling a slight craving crawling up on us, we were glad to see that famous Curry 36 has a second shop directly in front of the train station here, as just for us to grab a little snack.

Coming from the south, I’m generally a white sausage, no casing kinda guy but ordered, what I thought were the local signature specs here; red sausage with casing. This was nice though, because of the casing the sausage had a refreshing snap and the sauce was surprisingly fruity with a hint of heat from that curry spice coating the sausage underneath.

A place frequented by tourists and locals alike, feeding humans from all shapes, backgrounds, and trades and a lovely start to our little food trip.

Finally, after picking up a little bit of writing again, I’m getting around to review our trip to Berlin last October and even though we didn’t go to any of the official events, we made this our very personal Berlin Food Week(end). Come with me and…