These doors are made to open.

It gotten pretty late at the office and I just had finished one of the last yoga sessions of the day realising that way past 9 p.m. healthy dinner options thin out. I remembered that six months old Japanese restaurant next door which I had recognised first during its’ opening week when all the flower bouquets were lined up in front. I pushed aside the little sliding door at the entrance, it was still open, SCORE! It was totally empty and everyone was already cleaning up but they waved me in with a smile and guided me to take a seat.

Sitting at their bar it felt like ages ago that I had proper sushi and it suddenly turned out that I had missed it a lot actually. Therefore I ordered me a generous portion of delicious Maguro Sashimi (tuna), soft and chill, unfortunately a bit stringy at bits as well. 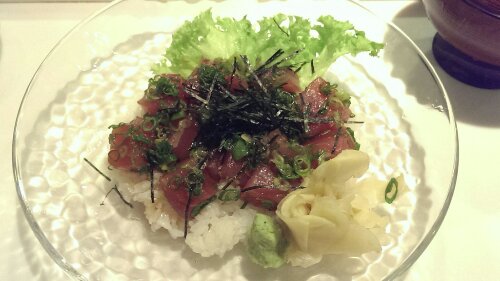 Proteins done but I still had to secure my carbo intake and it seemed like that Tekka Don could do a great job. The fish was from the same cut as my sashimi just shortly marinated in a special soy mix, fresh and softly sharp because of all the finely chopped scallions. The sticky Japanese rice was amazing especially with the vinaigrette and all in all a proper after workout choice.

As a palette cleanser in between all that fish, I ordered the Oshinki Maki (pickles) which I had expected to be that yellow pickled radish. To my surprise I received something green and super crunchy instead which one of the chefs told me was pickled turnip stem. Never had this but it was great and funny because of its’ scrunch with just a hint of sour.

I really liked it here and felt a bit special tonight with me as the only guest getting all the  attention. The chefs host like gentlemen and entertainers and aren’t shy to have a conversation with you, give  a recommendation or suggest customization of the menu items. I’ll come back here anytime if I feel like a treat and don’t mind to pay it as such as ‘Shinzo’ is also not the cheapest of places. Very nice.