Burgers of the Rising Sun. 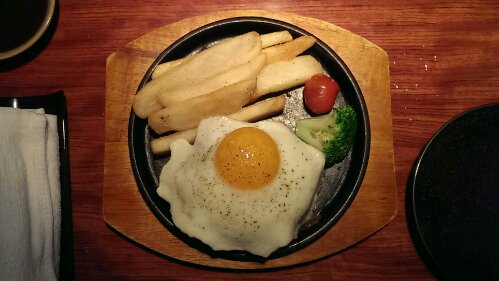 Now this was on my long time to do list for two reasons, first because I never really had some deluxe Japanese Hamburgers before and secondly because this place is somehow linked to the guys from Yazawa Yakiniku, which I haven’t been to yet myself but heard only great things about. So today was the day and the lord and I came down here to finally check it out. For how much their steaks cost, the place was surprisingly simple setup, with dimmed light and booth seating options just like at any other casual Japanese restaurant.

However, we both had the Masa Hamburg which is pretty much a high end 200gr hamburger patty (also available in 300gr)  which in our case was topped with a perfectly beautiful sunny side up and served on a hot sizzling plate. Making the first cut right through the middle was amazing as the egg yolk ran down in between the patty and started bubbling from the heat of the plate together with all the meaty juices. Okay so the looks were pretty awesome but more interesting was if the flavors could keep up with that. Unfortunately they couldn’t, don’t get me wrong this was a nice patty, soft with a light beefy taste but nothing that rocked my world and the fried egg, even though good looking, was just ordinary egg and it all was surprisingly under seasoned as well. Now there was salt and pepper on the side and also the onion jam had a nice flavourful touch but for $30 ish I had expected just a little bit more. At least I have tried it now, no regrets. 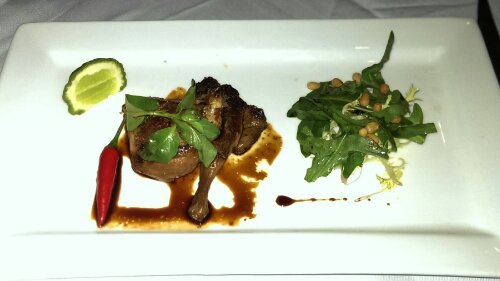 Because of work and travels my post backlog grew a little and so this year’s restaurant week checkout had to wait a little longer for publishing than usual. But here we were on a Sunday evening down Mohamed Sultan Road at Table at 7, a nice Central-European / SEA fusion restaurant.

The first course of the selection menu was an amazing 5-Spice Quail. Perfectly broiled with a delicate, slight gamey taste and glazed with a sweetish spice mix. This was a great start and before continuing with the serious staff we received a smallish cup filled with a Black Mussel and Saffron Soup which was creamily delicious except the one whole actual mussel in it which I generously passed to one of my friends.

As main I chose the Beer Roasted Suckling Pig. The skin was as thin and crisp as it gets with the meat underneath staying soft and juicy. The sauerkraut it was bedded on tasted great together with the pinch of star anis and made for some well-matching European-Asian flavors. Rounded up with a richly decadent and warm little chocolate tart paired with some cooling bailey’s ice cream our 4-course-dinner came to a delicious close.

I really really liked it here, the place looks nice and elegant, the service is friendly – even the chef came around and checked how we liked our food – and all above the dishes were not only appealingly presented but more importantly pretty darn tasty. I’ll come back.

My cwazy friend from Hong Kong was in town and because I never believed her that she could actually show me some decent Okonomiyaki in Singapore and since during all of her prior visits we never managed to come here, she finally dragged me down to ‘Nanjya Monjya‘ by the river. The place was packed and even with our (rather short notice) reservation we only managed to get a seat outside which wasn’t too bad on a beautiful evening like today. The only unfortunate thing was, that outside, the Okonomiyaki were served on plates while inside they cook it just in front of you.

The pork one became my numero uno with its’ tasty belly slices, a nice and fluffy mix of dough and cabbage and I totally loved the extra pickles too. The kimchi version was less impressive, also nice but a bit bland and didn’t really get that kimchi punch going that I was hoping for, it was actually more like a vegetarian version of the first one. Both could have used another centimeter in thickness and diameter, but that said, they’re still the giants under the Singaporean okonomiyaki.

Before the pancakes, pizzas, omelettes or whatever you want to call them, we also had a round of small dishes for starters. There was some weird dried and then grilled stingray carvings which sounded as interesting as they tasted oddly, way too fishy for me though.  Those were followed by a bunch of decent crispy chive gyoza and probably one of the best Miso Nasu (eggplant) I have ever had around here. It was spoon squeezing soft, nearly like caramelised and still wonderful savoury. Pretty wicked.

I had to hand it to her, this was a pretty awesome but next time I’ll try to get a seat inside, as even though it’s a scenic atmosphere out by the river, okonomiyaki still belong on a hot sizzling plate.

One bowl at a time.

It was ramen time again and since my birthday dinner I wanted to go back to ‘Miharu‘ and try their ‘Shoyu Ramen‘. I was about to order the one with the special soya but the waitress here was kinda dominant and sort of talked me into ordering the normal standard version instead. From what she said I doubted she ever had tried either herself but since I seem to have a soft spot for pushy waitresses I followed her recommendation and it actually turned out great.

Even that I really liked the soya base of their shoyu broth I was still a little bit reminiscing about that way saltier bowl I had at ‘Menya Musashi‘ in Tokyo, which made my mouth dry out big time. I still found the corn an odd ingredient in a bowl of ramen but appreciated the alien texture it added. The chashu wasn’t really anything special and this time I didn’t even try the bamboo shoots but therefore the egg was outstanding and on point perfect, coldish and waxy. I wonder if I will ever get their noodle process as the menu offers the option to upgrade the thickness of your noodles but every time I ordered a bowl so far asking for the thickest version I was told I didn’t have a choice. Anyway all in all a lovely bowl.

This visit wasn’t my last one here as I still want to explore their menu a bit more and hopefully next time I’ll find the guts to stand my ground against that waitress. One bowl at a time, one bowl at a time. 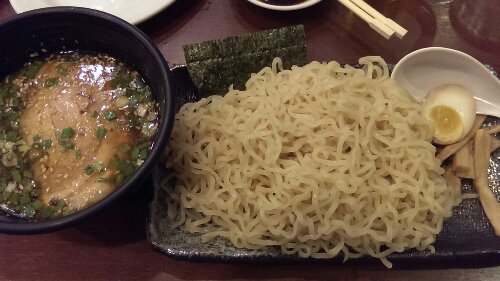 In the past we would’ve gone out, drink a little too much and get up to no good but this year we celebrated my birthday ‘old people style’ and appropriate to my coming age with a quiet dinner so everybody could make it back home before midnight. My friend chose ‘Miharu’ at the back of the Gallery Hotel close to Robertson Walk and Mohamed Sultan which he likes a lot. Whilst waiting we had a chat with some Japanese customers in the queue who regarded ‘Miharu’ as one of the more authentic ramen shops in Singapore.

As so very often recently I felt like shoyu ramen and since they had a version in my favorite ramen style I had their ‘Komi Tsukemen‘. I first hesitated as it was advertised to have a lemonish taste but I’m glad I didn’t change my mind. The broth was lovely salty with just a hint of lemon which didn’t taste alien at all but added some comforting freshness. While the chashu and the egg were mostly ok, the bamboo shoots tough were rather weird, pretty thick and brownish in color. They didn’t really taste good as well and so I left them mostly untouched on the side of my plate. My highlight were the noodles which they import directly from a noodle factory in Japan. They were thicker than usual, nicely twisted and super chewy so that despite the huge portion that it already was I still wished for more. Definitely a new contender for the great ramen places in this town.

We also ordered two sides of gyoza. The normal ‘Yaki Gyoza‘ where quite nice but the ‘Shi-So Gyoza‘ were just outstanding. According to the name they used shiso leaf in this which reminded me of thai basil and that gave those gyoza a very unique flavor that I want to taste again.

This place has been here for a while and I regretted not coming by earlier as I left yet again happy and content knowing that I had yet found another gem for my list. Brilliant.

My two new friends’ that I got to know through my family had there final night in Singapore tonight so I went down to their hotel at Robertson Quay to have one last dinner with them. We walked around for a bit screening for something tempting to sit down. So we passed the Japanese BBQ branch of ‘Aburiya’ and quickly agreed that this was the one.

We started up our meal with the ‘Horenso Salad‘ which is put together from spinach leaves, Japanese cucumber, roasted garlic, lemon juice and crispy bacon bits. How great was that, nice and sour with crunchy textures in between from the bacon and garlic. The first meat that arrived together with the ‘Stuffed Shitake Mushrooms‘ was ‘Jo Rosu T.Shio‘, beef loin to be dipped in truffle salt. This was amazing. The meat was super tender, very lean but therefore less strong in taste but powdered with crazy salt it won another couple of notches in taste.

We continued with ‘Wagyu Jo Karubi Tare‘ – short rib marinated in a special soya sauce mix. This was my absolute favorite of the evening as the marinade was delicious and due to the nicely marbled fat in this cut the beef just melted in my mouth. We ordered another round of this as well as an extra portion of the truffle salt from before which made it even more delicious. The final dish was ‘Tigerprawns in Hot Miso‘ marinade. The prawns were big and obviously watered properly as they were completely clean without cutting them up. They stayed nicely juicy on the fire and the marinade was mildly tangy, not hot though which was a bit of a bummer.

‘Aburiya’ is another proof that simplicity paired with high quality ingredient is a fantastic combination looking for perfection. Of course these kinda places are not for everyday dining but here you have the choice between many different meats, cuts and prices and so we ended up paying roughly 50$ per head excluding drinks which I regard reasonable for great stuff.