This was on nearly every Singaporean based foodblog the last couple of weeks and since a friend asked me to go and I had never been on one of those events we went early Saturday to start with an early lunch.

Where to eat first was already decided before we even arrived  – the ‘Porchetta Sandwich‘ from the ‘The People’s Pig’ (USA). This was one good start of the day. Eventhough they only gave out half sandwiches, those were delicious. The suckling pig like roast meat was juicy and pleasantly fatty with a sweet and spicy chili jam on top that gave the whole thing a bit more punch. The bitter flavor of the arugula balanced out the fattiness and spice and to top it off they added a nice piece of crackling which I would have loved to be bigger. The Inside of the ciabatta bun was dipped in the pork jus which gave the sandwich an even meatier taste. So we were off to a good start.

With the pork sandwich half way down we strolled a few stalls further for the ‘Tacos‘ from ‘Tacombi’ (USA). First disappointment was they didn’t offer the ‘Beef Tacos‘ anymore as they apparently didn’t turn out right in this climate. Second disappointment was that the ‘Fish Tacos‘ weren’t really that good. The battered and fried fish was super dry and so was the tortilla they used. Even though the chipotle sauce was quite tasty and the red cabbage was nice and crunchy I felt unsatisfied.

Now it was time for some Asian food and so we head for one of the longest queues all the way at the end ‘Phan Rang’ (Vietnam) with their ‘Banh Xeo & Banh Khot‘ combo. ‘Banh Xeo‘ I already had before in Vietnam and these ones were really tasty filled with crunchy sprouts and vegetables and fried crispy on the outside. The ‘Banh Khot‘ were like little egg tarts with prawns and I wished they would’ve been a bit longer on the heat as some of them were quite raw inside tasting like undercooked omelette but overall still not bad but I didn’t envy the chef, assembly-line-frying both dishes without a break. 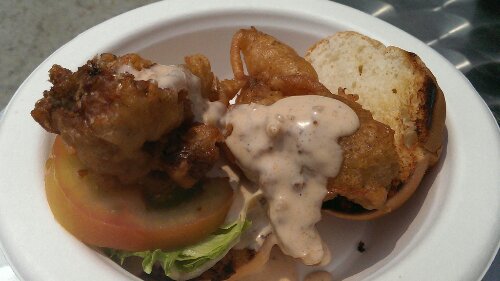 Switching back to western cuisine we opted for the ‘Soft Shell Crab Burger‘ from ‘Euro Trash Food Cart’ (USA) and yet another dissapointment – they ran out of their beef paddies so we had to go for the plain crab option. This slowly started to seem like a pretty “incomplete” event. Luckily even without the beef paddy this was a pretty awesome burger once I did get over the fact that I ate a whole crab with everything in and outside, I’m weird like that. The crab was crispy and still moist inside and the thousand island like dressing gave it a nice fresh touch. Just the bun was more the sweeter kind which I found slightly odd.

Further on the western trail we arrived at the ‘Swamp Shack’ which sold ‘Shrimps & Grits‘ and their so called ‘Smothered Chicken‘. The shrimps were mega crunchy with a very dry batter which held up pretty well against the gravy and the grits which was like a corn polenta, nice and fluffy yet very filling. The chicken dish had the same gravy with mashed potatoes but I had a hard time finding some meat in there. Good comfort food with the grits as my favorite component.

Next up was ‘Soto Tangkar‘ by ‘Pak Haji Diding’ (Indonesia). The soup was quite rich and a tad spicy but the beef didn’t really cut it as it was too chunky and tough for my preference.

Now this was one of my highlights of the day, the ‘Seafood Tostada‘ from ‘La Guerrerense’ (Mexico). On their sign they offered two different kinds but our crispy corn tostadas came with everything on it they had in stock. The seafood topping was a cevice of fish, crab, shrimp, tender octopus and delicious sweet scallops that must have just hopped out of the sea. This was then finished off with a big cajun style marinated shrimp big chunks of avocado and a spicy shrimp lemon juice with peanuts. So delicious complex simplicity.

Until now we had stayed away from the Indian stalls as many of them seemed to sell quite filling stuff but this one looked pretty interesting and so we tried the ‘Litti Chokha‘, little charcoal baked buns with a mix of tomatos, potatos and eggplants as well as some mint sauce to go with it. The buns were harder on the outside and crumbling on the inside and soaked up the condiments pretty good. I really liked the vegetarian chokha as it was nicely light and suited the buns well. 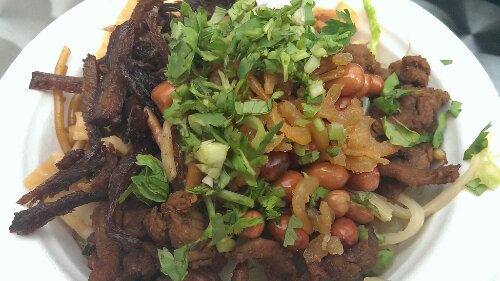 As they had both, beef as well as pork jerky we ordered the ‘Hainan Fen‘ from ‘Hai Ya’ next. Apparently a very common dish from the Hainan province in China but I had never heard about it here. Thick eggs noodles were topped with a multitude of ingredients – beef and pork jerky, cilantro, chives, peanuts, sprouts, little shrimp, squid and a soya based gravy. I realy liked it, especially the jerkies and peanuts and even the tiny shrimp weren’t as fishy as I thought. One thing I would have loved to have missed though was the squid which was also some kind of jerky, pretty strong in taste and hard to pick out as it camouflaged itself as noodles.

Enough of the filling dishes we went back to India and tried the ‘Chicken 65‘ from ‘Abhishek’. This fried chicken was covered in a wondeful spice mix with a citrusy fragrance and the sweet spiced dipping powder took it all to the next level. That was awesome and I just wished lean chicken breast was more popular in Asia as that would have made this even better.

After all those hearty dishes it was time to check out the dessert corners of the fairground and so we started with ‘Kue Pancong‘ (Indonesia) that were lightly baked coconut cakes in a special shape topped with white sugar. I love coconut so this was right up my alley, maybe just a little dry. 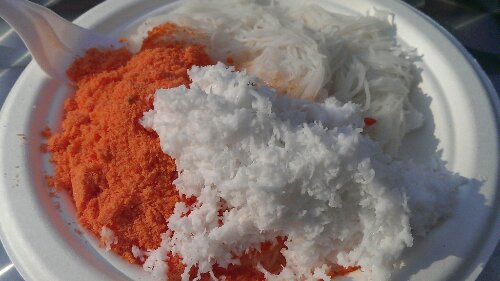 The next sweet affair again came from India and was offered by a Singaporean stall named ‘Heaven’s Indian Curry’. They offered a dish called ‘Putu Mayam‘ or ‘String Hoppers‘ which was basically freshly pressed and steamed rice noodles topped with bright orange sugar and grated coconut (also available with chicken curry). This was great and tasted quite light cause of the steamed noodles and the dessicated fluffy coconut with a sweet cover of orange caramelized sugar. If you missed the fair their shop is at #01-15 Ghim Hoh Market and Food Center, 20 Ghim Moh Road.

Before washing all that wonderful stuffing down with the one or other Warsteiner we had one last sinful dish, the ‘Sticky Rice Banana‘ from ‘Nam Bo’ (Vietnam). I was lucky queueing up at the right time as the staff on the fairground told me this is by far the most popular stall and waiting can be rather long during peaks. I really like Thai ‘Mango Sticky Rice‘ and thought this might be similar but here they wrapped banana chunks in glutinous rice before grilling it over coales wrapped in bana leaf and finishing it with a thick sweet coconut sauce and sesame seeds. Eventhough I would have wished for more banana this was a lovely closer to an endless seeming feast and so seven hours and fourteen dishes later (I didn’t count the seconds of ‘Porchetta Sandwiches‘) we finally capitulated and didn’t move too much for a while.

I really enjoyed my first food fair experience even with some sold out items and complete stalls being closed like the Danish pork buns which I was so looking forward to. What really pissed me off was that they re-opened on Sunday again. Dang!

Did get hell of a shock when a colleague told me that the building where Ochsenbrugh is located had been sold and it's future seems uncertain. Therefore we had to indirectly show our support and appreciation and summon a pizza lunch that be very same day. Thankfully it surfaced that at least for 2020 everything will stay as is, afterwards we'll have to see, maybe it's a hoax altogether? . . . . #pizza #pizzamargherita #pizzatime #pizzaparty #italianfood #freiburgmittagstisch #freiburgfood #getmygrubon
Homemade chili and cornbread, made for a comforting birthday dinner. Thanks so much and... YUM! 🥣😊 . . . . #chili #chiliconcarne #cornbread #homecooking #homemade #fromscratch #dinnerparty #getmygrubon
Slight deviation from our quiche house recipe using less cream and more nuts and playing around with the rest of the ingredients, adding leek and some leftover frozen pork belly back from when I tried to recreate the @momolongplay pork buns. Crumbly but so tastiful. . . . . #quiche #frenchfood #homemade #homecooking #fromscratch #baked #getmygrubon