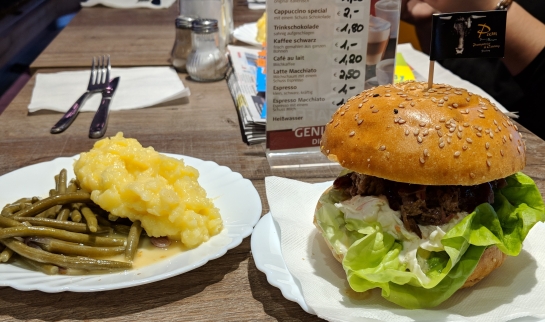 Just when I thought there’s nothing more to discover on this site of the train tracks my colleagues told me about that butcher a rough 10 minutes down the road, that apparently does some pretty good dry ageing and pork pulling. So without further ado, two colleagues and I went down to check out this magical ‘secret’ shop on Lehener Straße that was hidden from me for such a long time.

We were greeted warmly by the kind ladies behind the counter, who took our order of pulled pork burgers with a smile. Now those burgers weren’t huge but decently sufficient, and at the prices, they’re calling here, more than fair anyway. It was already a burger for lunch so I passed on the fried and starchy side options and went for some green beans from their salad counter, which seemed like a proper enough addition to the set. 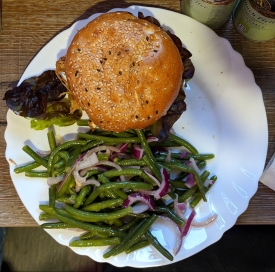 The layered toppings on my sandwich were made up of tenderly pulled apart pork neck, crunchy leaves of butterhead, crunchy creamy coleslaw, and just the right amount of bbq sauce all squeezed in between a well holding up bun with mixed sesame seeds. Excellent.

Just about two weeks later I already held my second sitting here with the equally tasty pulled beef version of this, which was way saucier and to my surprise at least as succulent and juicy. Again, excellent stuff.

This is one of the best, if not the best butcher delis in town and I won’t be holding off my third visit for too much long either and return to throw back one of their dry-aged burgers and chat some more with the boss about his mighty fridge of treasures. Loving it.