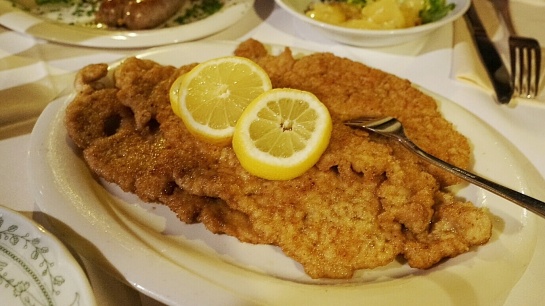 The Schnitzel (these are two ‘small’ portions of breaded pork schnitzel)

M has been raving about ‘Zum Ochsen’ and their ridiculously awesome and huge schnitzels, so this had to happen eventually. We were quite lucky as we made our booking rather spontaneous and therefore, had to show up at point 6 p.m. to be done by 7:30 p.m. when the guests for the proper evening reservation arrived. Inside and outside you can see and feel the history of this old Freiburg institution that until today has no written menu. The waiter introduced us to the few dishes of the day with schnitzel having a permanent gig besides more seasonal dishes like venison sausage and vegetarian mushroom pancakes. Since M ordered the ‘small’ portion of schnitzel which included two huge slaps of thin and crispy breaded pork escalope, I knew I was getting a taste of it. That, and not having one in ages played a role in me ordering the cordon bleu instead. 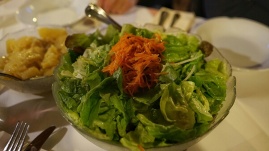 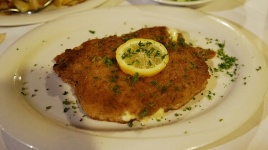 First up came the default sharing bowl of green salad. You don’t get to see this serving style very often nowadays, it was huge and the best was that the dressing was made in good old grandpa style. Nice one. Since the menu is so small and an estimated 75% of all customers going for the schnitzel, the kitchen was pretty streamlined and food came out reasonably fast. My cordon bleu was absolutely delicious. The excess oil was nicely drained, the crust was crispy and the inside juicy and very well seasoned. The ham and cheese gave extra flavor but didn’t overpower the main act. It was pretty fantastic, sufficient and at Eur15 tolerably priced. Sneaking a couple of pieces of that famed schnitzel though I already knew what my order was gonna look like next time. Super thin and still having strong flavors going on with another thin layer of crispness blanking it all wonderfully. The potato sides also did the job with the brägele  (roasted potatoes) being full of nice and crunchy baked bits and the potato salad being pretty good as well .

If you’re in Freiburg and love a good schnitzel you should definitely come and check this place out. If you’re bringing an even bigger appetite you can go for the large portion that comes with an extra (third) schnitzel so you should be all set. And in case you shouldn’t be able to finish up, the friendly waiter will be more than happy to supply you with enough tinfoil to doggy bag it all home. I for one will be back as soon as I feel like a solid meaty schnitzel meal again. Can’t be long.