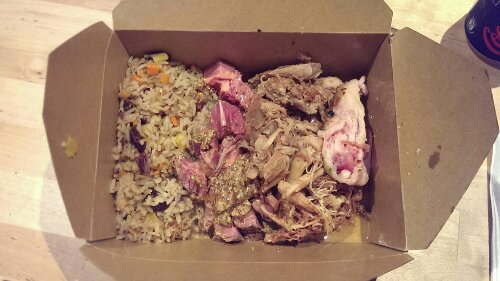 It was Saturday and my mates and I didn’t really know what to better do with our time than making the “long” way out to old Turf City – The Grandstand – and try out ‘The Sea Salt Caribbean Deli’ that I had spotted in Pasarbella during my last visit.

I had their ‘Yaroa‘ a large triple meat box which comes including some roasted chicken, pulled pork, beef roast and a starchy side, in my case some rice and beans. The chicken actually looked a bit weird with some red parts around the bones but was succulent and tender tasty. The beef tasted great and had been rubbed with a sourish grain mustard all around. Unfortunately it was also quite cold and had some pretty stringy parts, that were in it for the long chew. My favorite thing in this box was the pulled pork, slow cooked and overly moist, sitting in it’s own natural juices and even something unexciting like the rice and beans was delicious as well.

‘Sea Salt Deli’ is just a stand in a market hall but has some really nice and great quality food options to offer and even though it took a lot of self control not going to ‘Omakase Burger‘ instead I was glad we tried this and will probably return to get a grub on their deliciously looking ‘Pulled Pork Sandwich‘, which my other friend had.