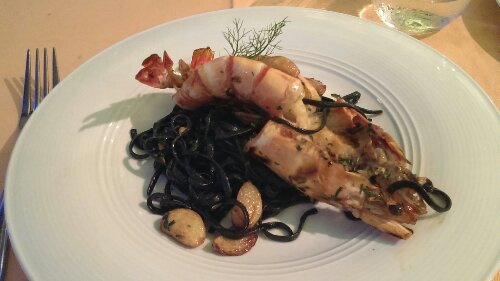 I had been to ‘Valentino’s’ before when they still were in their small shophouse at Riffle Range Road and since a colleague and I didn’t have anything better to do tonight we decided to try out their new location at the Grandstand, former Turf City Shopping Mall.

After a lovely nutty ‘Ham Platter‘ and some creamy ‘Vitello Tonnato‘ I ordered one of their off-menu specials, the ‘Aglio e Oglio Linguini Nero di Seppia‘ with king prawn. The linguini were nicely al dente and not too oily. The prawn was humongous, quite fresh but rather bland. The kicker though were the roasted garlic gloves that melted in my mouth and had a nice charr flavor without being to overwhelming garlicy. A bit more seasoning and this would have been pretty great.

Out of pure curiosity we ordered a pizza ‘Margherita‘. Unfortunately this was pretty underwhelming. The dough was thin and crispy but the sugo didn’t taste like much and the amount of cheese on top was simply too much for my preference. It was not a bad pizza but from a place with such a reputation I was expecting a little more than just ok.

The ‘Panna Cotta‘ I had for dessert was not that special either with very little vanilla and a bit amateurish in presentation but what I really liked was the berry sauce that came with it. Nice and sour.

The quality and taste of the food was pretty good but because I thought to remember it a bit different and also because ‘Valentino’s’ is not necessarily a cheap restaurant I was just expecting a little more.  On the upside the service was outstanding and the staff super friendly but it was a bit sad to see they had lost a bit of their family run restaurant charm which only small places have and small is not was ‘Valentino’s’ is anymore.